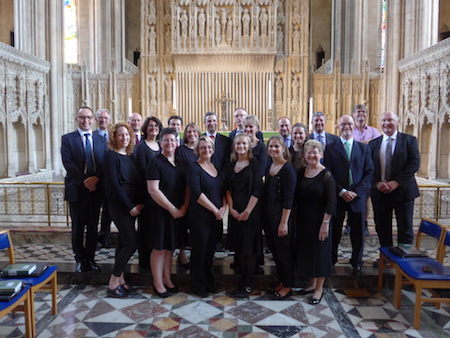 The City of London Chamber Choir was founded in 1998 by a group of enthusiastic singers who had previously performed together in the University of London Chamber Choir. The 'CLCC' has gone from strength to strength and we now aim to sing the services in Cathedrals and churches around the country four or five times a year, along with two or three concerts - and the occasional wedding. In addition, the choir does an annual Christmas concert in aid of the Guy's Chapel.

Our Cathedral tours take place in an ever-expanding list of venues, including Westminster Abbey, Liverpool Anglican, Durham, Lincoln and Worcester Cathedrals to name but a few. We have also performed concerts in a number of locations in and around London such as Ringwood, Lyndhurst and Cambridge. To find out about our plans for this year, please see our events diary.

The repertoire sung by the choir consists of a mixture of ecclesiastic and secular music, ranging from the 16th century to the present day.

Christopher Field has enjoyed a varied musical career. As a boy he was a chorister at the Queen's coronation in Westminster Abbey and played the double bass in the London Schools' Symphony Orchestra. He was a Choral Exhibitioner at Trinity College, Cambridge after which he studied at the Royal Academy of Music. Christopher has performed extensively as a soloist and conductor and has taught double bass and singing. He joined the staff of Dulwich College in 1969, retiring in 2000 as Deputy Master. He has been the conductor of the City of London Chamber Choir since 2001.